“For the Sake of the Children” 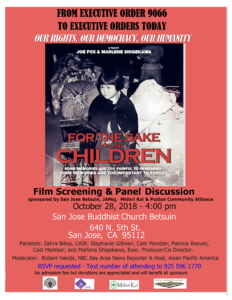 Please mark your calendars for Sunday, October 28, 2018, 4 pm at the San Jose Buddhist Temple Gym, (640 No. 5th Street, San Jose, CA 95112) when Midori Kai will be one of the sponsors of the documentary film, “For the Sake of the Children”. Marlene Shigekawa, a former Midori Kai Board Director, is the Executive Producer and co-Director of this film about the WW II Poston Internment Camp.

We welcome you to attend this special South Bay showing, which will be followed by a panel discussion with Robert Handa, NBC Bay Area News Reporter as the moderator. If you plan to attend please RSVP by either sending a TEXT to (925) 596-1770 or email Phyllis Osaki at posaki@gsmanagement.com, with the number of people attending and your name. There is NO CHARGE for admittance; however, any DONATION is welcome.

Two-time Grammy nominated jazz artists: Hiroshima in a rare South Bay appearance! For over thirty years, Hiroshima has given audiences a style of music we can call our own. They have successfully crossed over into the mainstream and introduced traditional Asian instrument mixes into a contemporary jazz fusion sound and given the world of music a gift.

Yu-Ai Kai’s 9th Annual Sake San Jose event was held on Thursday, May 22, 2014. Hundreds of sake tasters gathered on the streets of historic Japantown San Jose (on Jackson Street, between 3rd and 7th Streets) for one of the most anticipated fundraisers of the year.

This year’s opening ceremony featured our guests of honor in a ceremonial sake cask breaking (Kagami-wari) and a toast of Kanpai! Approximately 25 Japantown businesses hosted a pouring station, where Yu-Ai Kai volunteers offered samples of sake made both in Japan and the U.S. 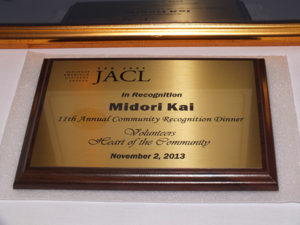 Yu-Ai Kai’s 8th Annual Sake San Jose event was held on Thursday, May 23, 2013. Hundreds of sake tasters roamed the streets of historic Japantown San Jose (on Jackson Street, between 3rd and 7th Streets) for one of the most anticipated fundraisers of the year.

This year’s opening ceremony again featured a lively performance by the San Jose Taiko group followed by our guests of honor in a ceremonial sake cask breaking (Kagami-wari) and a toast of Kampai! More than 20 Japantown businesses hosted a pouring station, where Yu-Ai Kai volunteers offered samples of sake made both in Japan and the U.S. The following individuals received this honored award for their efforts to better the community and to promote Japanese American cultural ties and awareness.

Following this award presentation, Consul General Inomata then dedicated the cherry tree that has been donated to the Issei Memorial Building from the Consulate’s office.

Midori Kai Directors volunteered at this annual event which benefits Yu-Ai Kai Senior Service, a nonprofit senior center in San Jose’s Japantown. Sake San Jose provided a leisurely walk through historic Japantown while listening to live music and visiting the many shops and businesses for a tasting of an assortment of both domestic and international sakes, all for a great cause. Kampai!

Luncheon with Congresswoman Mazie Hirono of Hawaii – May 1, 2012

Midori Kai members attended a luncheon to meet Congresswoman Mazie Hirono of Hawaii, at Hakone Estate & Gardens in Saratoga, on May 1, 2012.

Congresswoman Mazie Hirono (D-HI) will likely be the next U.S. Senator from Hawaii. If elected, Mazie will be the 1st Asian-American woman Senator in history and would be the 1st Japanese-born Member of Congress.

The Congresswoman is a close friend of Senator Daniel Inouye (D-HI); U.S. Senate Pro Tem, Chair of the Senate Appropriations Committee, and the 1st Japanese (and Asian) Member of Congress and the U.S. Senate in history. Senator Inouye is actively supporting Congresswoman Hirono’s bid for the Senate and she is leading in the polls by a substantial margin.

AACI‘s Annual Fundraising Luncheon was held on April 26, at Villa Ragusa in Campbell, CA. This annual fundraising event is held to provide an opportunity for everyone to help AACI improve the health, mental health, and well-being of individuals, families, and the Asian community. 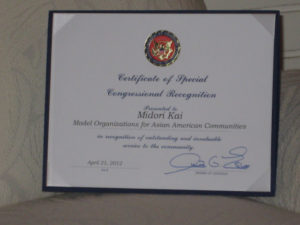 Naomi Nakano-Matsumoto was in attendance to accept the award on Midori Kai’s behalf. Joyce Iwasaki and Sally Takemoto attended the Recognition Awards Banquet with Naomi.

Yu-Ai Kai Senior Services hosted a Volunteer Recognition Luncheon on April 14, “Volunteers, Making a Difference During Hard Times.” Midori Kai was honored to be invited to this event.

Many of our Midori Kai Board Members were in attendance either honoring a family member or volunteering at the event. Here is a list of those in attendance:

This year, Sake San Jose premiered a new event in the brand new James Akiyama Wellness Center, the Akiyama Sake Tasting.  A special collection of premium sakes were assembled for tasting in the Center’s Sakura Room.  Along with sake, a variety of “small plates” were offered to accompany the sakes.  Sake experts were available to offer information about the different sakes being tasted.

We are pleased to announce that Midori Kai is celebrating the publication of “MAKING HOME FROM WAR”, an anthology of memoirs written by twelve different Japanese Americans about their experience coming home after they left the Internment Camps. Midori Kai is sponsoring the reading by some of the authors.

Please join Brian Komei Dempster, editor of Making Home from War, as well as production manager Jill Shiraki and some of the contributing writers from the book, for a presentation and celebration of their work. Produced by the JCCCNC and published by Heyday, this anthology offers memoirs–written mainly by Nisei–on the Japanese American post-war resettlement experience and a workshop model for other former camp prisoners to tell their own stories. Major funding for the anthology was provided by the California State Library–Civil Liberties Public Education Program. The program will also feature Felicia Hoshino, illustrator of My Dog Teny, a children’s book written by Wayne Osaki. The story was first published in the anthology, From Our Side of the Fence: Growing up in American’s Concentration Camps; produced by the JCCCNC.

The Grand Opening Ceremony occurred on Saturday, October 16, at 1:00 pm, and featured entertainment by San Jose Taiko; a blessing by board member, Reverend Byron Ishiwata; and an opportunity for the public to view the new exhibits.

Midori Kai Board Members Aggie Idemoto is JAMsj current President and Pam Yoshida is the architect on this project.

San Jose Japantown is one of the last three major Japantowns that remain in the United States. Japantown Community Congress of San Jose (JCCsj) was created to continue the cultural and historical preservation of our 120 year-old, multi-ethnic Japantown. The JCCsj is composed of Japantown advocates, including representatives of major organizations, members-at-large, residents, businesses and property owners.

Sakes made in Japan and the US, such as daiginjo, ginjo and junmai grades of premium sake were available for tasting, providing a great opportunity for connoisseurs and novices to sample and learn about a variety of sakes.

JAMsj Fashion Show and Luncheon “From Kimono to Contemporary” – May 22, 2010 (photo album)

Midori Kai was recognized in the category of “organization or agency” for overall work, but primarily for our work on the “Diaper Drive.” Midori Kai members attended a luncheon where the award was presented by Santa Clara County Supervisor Liz Kniss (District 5).